We were recently informed of the passing of MSgt Master Sergeant Lynn Davis Mattocks, U.S. Marine Corps (Retired); father of our Detachment Judge Advocate Tom Mattocks.  MSgt Mattocks passed away on 24 July 2022 and has gone to "guard Heaven's Scenes." HOSTED BY THE TOWN OF MURRIETA

This holiday celebrates all Vietnam War Veterans, making no distinctions between those who served in-country, in-theater or who were stationed elsewhere.

On 26 March 2022 (Sat), I had the opportunity to represent Southwest Riverside County Marine Corps League (MCL) Detachment 1057 at the City of Murrieta, CA's event recognizing our Vietnam Veterans.

Special thanks to John Z. Hernandez of the VFW & MilVet's Raven Leigh Hilden & others for putting on this event along side the cities of Murrieta & Temecula, & their Mayors Jonathan Ingram & Matt Rahn, respectively.

We recognized Ed and Sandra Wiggs for their many years of volunteering in support of fundraising for our Detachment.

On 13 January 2022, the 11th Marine Regiment hosted the Saint Barbara's Day Celebration at the Camp Pulgas gun park.  Our very own Commandant, Mike Frazier  was there to celebrate with the regiment along with many other Veterans and Retirees.

See below for our latest activities at monthly meetings, celebrating the 246th Marine Corps Birthday, Veterans Day Parade and welcoming our newest members. 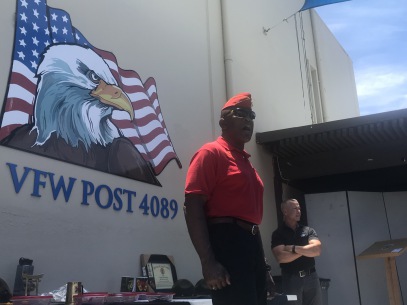 The competitors demonstrated their skills in manual of arms, the "Rusty Hat" cadence calling contest, storytelling, along with judging various drill instructor displays of yesteryear.

This event also hosted a historical display of a World War Two-era Willy's Jeep, along with a number of fundraising activities supported by a team golf competition, along with auctions and raffles of special Marine Corps-themed items. 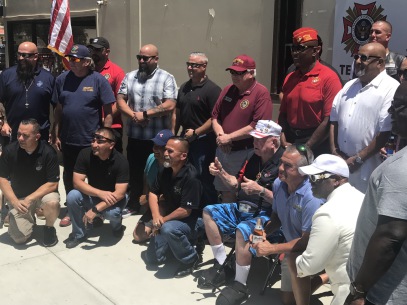 Former Marine Corps Drill Instructors, members of MCL Det 1057 and VFW Post 4089, stand together in a group photo, marking the end of the annual event.

This event served as a reunion amongst former drill instructors who now reside in Riverside and San Diego Counties.  As they gathered, for a moment, these Marine Corps veterans were transported back to their time, serving at the recruit depot, making raw civilians into United States Marines.

DETACHMENT OF THE YEAR

at 2015 Department of California MCL 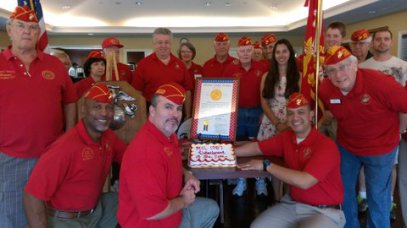 On June 27, 2015, Detachment meeting we celebrated our award with a cake cutting! 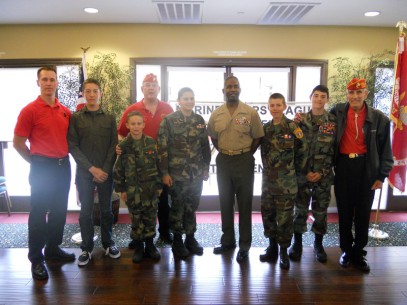